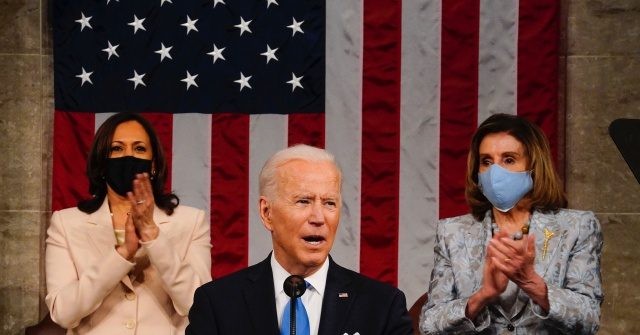 John Binder is a reporter for Breitbart News

[QUOTE]Senate Democrats are seeking to slip an amnesty for potentially millions of illegal aliens into an infrastructure deal and lobbying President Joe Biden and Vice President Kamala Harris to support such a maneuver.

According to the Miami Herald, Sen. Bob Menendez (D-NJ) is urging Harris to get behind a plan by Senate Democrats that would put amnesty provisions for illegal aliens into an infrastructure deal.

Sen. Bob Menendez pressed Vice President Kamala Harris in a private meeting this week to include a pathway to citizenship for undocumented immigrants in legislation that includes the Biden administration’s infrastructure proposal. [Emphasis added]

Menendez, who is a lead sponsor in Congress of President Joe Biden’s immigration agenda, made a “big push” to Harris on Tuesday to include the citizenship measure in emerging infrastructure legislation, according to a participant in the meeting. A spokesperson for the New Jersey Democrat confirmed that characterization. [Emphasis added]…

Menendez would like to see the immigration proposal attached to any bill that lawmakers and Biden decide to move forward, his spokesperson said. [Emphasis added]

this week that Sen. Bernie Sanders (I-VT) and Senate Democrats of the Senate Budget Committee are working on an infrastructure plan that would include giving amnesty to:  Illegal aliens enrolled and eligible for the DACA [Deferred Action for Childhood Arrivals] program Illegal aliens considered “essential” to the American economy Illegal aliens enrolled in Temporary Protected Status (TPS) “I am optimistic,” Sen. Alex Padilla (D-CA) told the AP of the amnesty provisions.

The Senate Democrats are seemingly taking marching orders for amnesty from corporate interests, including Facebook CEO Mark Zuckerberg’s FWD.us, which lobbies for an endless stream of foreign workers to take white-collar American jobs.

Last month, FWD.us hired a former assistant Senate parliamentarian to craft a plan for Democrats that would pass amnesty for illegal aliens through a little-known “reconciliation” rule.  And consider the NATIONAL SECURITY THREAT as Illegals come from over 70 Countries!

The cost of these Bills could be as high as $1.3 trillion or more!

These House Reps. also pushed through to The Senate The Farm Workforce Modernization Act (H.R. 1603) which would grant amnesty to more than 1 million alien farmworkers AND their family members, all ultimately eligible for Citizenship. Just as troubling, it would also replace the existing agriculture guest worker program with a new one. Farmers would be able to sponsor guest workers, and if they work a certain number of hours over a set period of time, workers may receive a green card.

Together, the two bills would grant amnesty to more than 5 million illegal aliens while doing nothing to prevent the kind of massive border surges that Border Patrol agents currently face as well the House Reps. passed to the Senate the Citizenship for Essential Workers Act (H.R 1909, S747) to the Senate. It would create a pathway to Citizenship for Millions of "Essential" workers. Among those included would be farmworkers, meatpackers, nurses, janitors, construction workers, grocery store clerks, truck drivers, restaurant cooks, domestic workers, home health care aides, emergency first responders, ACT NOW; Tell your representatives you Oppose all the Amnesty bills and insist they re-implement all the Trump policies re the Border and re: Legal Immigration Demand that our National Legislators enact an all-categories-included zero Net Moratorium on Legal Immigration and to stop subsidizing LEGAL immigration with the $330 Billion that American Taxpayers already spend every year to subsidize it — that is $758 Million/year* Net per Congressional District for the 1.5 Million plus immigrants admitted legally each year. (400,000/year into California alone annually) prior to the Biden Executive Orders. See CCN's study of the Net Costs of Immigration at our website carryingcapacity.org.

Important to emphasize is that CCN is a Genuine Mass Immigration REDUCTION Group, so Donations to CCN have far more impact dollar for dollar than Donations to Mass Immigration MANAGEMENT Groups who refuse to support a Zero-Net all-categories-included Moratorium on Legal or to oppose Marxism and the Marxist inspired Cancel Culture and Open Borders.

Therefore, CCN invites once again all genuine REDUCTIONIST organizations to Join our Diversity Coalition for an all-categories-included Immigration MORATORIUM . . . a Coalition supported by many Immigrants from all Ethnic Groups.

We have taken the lead for a decade in warning about Cultural Marxism.

See for example the superb 2010 article by Lind available via link near the top right of our home page.

One says its goal is to stop Illegal Immigration, but refuses to push hard to reduce legal immigration or to acknowledge the Magnet effect the uncapped Asylee and other Categories in Legal Immigration have on drawing in illegal immigrants, who can via that category automatically be designated Asylees and thus de facto legalized.

The other group says it is for “lower immigration levels” but that too is entirely Counterproductive because it sends the Message that Mass Immigration is OK but just at lower levels.

As we have been saying for over ten years the Only Position which generates enough Political Power to get reductions in Legal and Illegal immigration is to advocate an all-categories included Zero-Net Moratorium on Legal, finish building the Border wall and reinstituting the Remain in Mexico policy.

We can have a substantial impact on stopping or watering down the oncoming bills., and the oncoming CARAVANS, (which include Migrants from over 70 countries!). We have Activists in almost all states!!

However, the pandemic/economy has greatly hurt our Donations. Our nonprofit is now running on air.

The Open Borders and Marxist/Cancel Culture Threats are Intensifying!!.

Donations are Tax-Deductible. Help CCN intensify our efforts.  Please DONATE Today by Credit Card at Carrying Capacity Network, Inc. or by Check via U.S. mail to:

Support CCN! Our efforts cost money and only you can help.

New ! Use FirstGov to contact your representatives in Congress, and track their records on issues vital to national sustainability:

Use FirstGov to search for current news
on pertinent legislation: